Creating your own WLM '09 server the updated way

This is the long awaited update to reese’s local server creation guide.
While it’ll be mostly similar, broken/old steps were fixed/updated to work normally with the master branch. 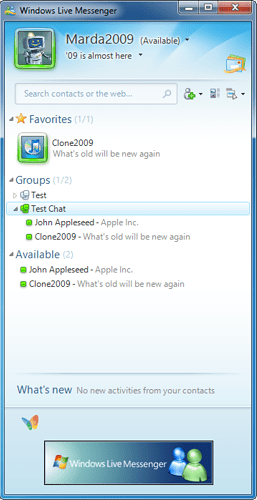 2009main360×699 94.3 KB
As stated in the original post, this tutorial is for Windows ONLY. Running it on Linux/MSYS2 is not possible at the time of posting.

Download and install Python 3.6. Make sure to add Python to PATH during the installation.
After installing Python, install Visual C++ Build Tools to fix the HLL error and install all dependencies properly.

Then download the server’s master branch (located at https://gitlab.com/valtron/msn-server/tree/master) as a zip archive and extract its contents to somewhere, preferrably Documents.

You’ll also need to add settings_local.py in the root of the local server folder.

Then run python script/user.py emailhere@service.com to create a user. After you run the command, insert the password needed for the user(the password will stay invisible as you type). You can repeat this command to add as many users if you want to run multiple WLM processes and talk to yourself (You’ll need MSN Polygamy).

Then go into the HOSTS file (located in C:\Windows\System32\drivers\etc) and add these lines:

Remember that if you want to use any official Microsoft services after testing the server, add a # to the beginning of 127.0.0.1 login.live.com to disable it.
Save your changes to HOSTS and close it.

You can now run python dev through Command Prompt(not Git bash) to run the server. A cerfiticate will be generated the first time the command is run (located in .devtls_cache\DO_NOT_TRUST_DevTLS_Escargot.crt).
Install it to the Trusted Root Certification Authorities as shown below:

image733×238 11.2 KB
After you install it, run the command again and the server should start running.
(If it errors out instead, make sure to check for any running VMWare/Virtualbox networking processes and terminate them.)

Start WLM '09 and attempt to log in using any of the accounts you created. If you managed to log in with no issues, your server works!

Also to clarify that port forwarding your server IIRC doesn’t work and only runs on LAN. You can only use another computer, use MSN Polygamy to use multiple WLM windows, or use a tunneling software like Hamachi.

If you have any issues, let me know and make sure the check out the original thread as there’s many useful info there.

EDIT: Creating a WLM 2009 server seems to have been broken by a recent commit to the WLM 2009 branch. If you still have an old copy of the branch, keep it. It just seems that this thread was made at the wrong time. I initially said I wanted to do this in the form of a YouTube video but since my PC died I can’t do that, so this will be a thread instead. [image] This tutorial is using the Windows Command Prompt. Running it on MSYS2 or an actual distribution of Linux is beyond what I can do You…

EDIT: Python 3.8 seems to have deprecated funcli.py altogether, thus rendering it incompatible with the local server, and the replacement funcli.py does not work.
If you have anything higher that 3.6, you’ll need to uninstall that and install 3.6 instead to make the local server function.

EDIT 2: WLM ‘09 support is right around the corner now that the server supports MSNP18 and there’s only patching and database migrations left to do, so at this point, it’s just better to wait.

EDITS 3-15: Cleaned up the post and added some updates.

when i try to run dbcreate.py it gives me an error that says unexpected indent

Did you install the db module? If you haven’t, run python -m pip install db to do so.

i still get the error

Seems like you forgot to add your server location to PYTHONPATH.
Change the value of PYTHONPATH to the server folder’s location (example: C:\Users\yourname\Documents\msn-server-master).

i added it to pythonpath

If you do all of this. Why it not work for you? You forgot something?

it’s weird, it worked for me

Soooo. Wheres the download for msn 2009 on this tutorial and the yours? I can download the msn 2009 version final?

But… I want to know wheres the link. What’s the version i should use?

Any version can run i think, i don’t remember the one i used for making mine in 2018

You can use any final version of 09 with the server, but I’m not sure about the beta versions.

can you help me about create accounts ??

So no anyone gonna help he?