So it appears that Wildman's Yahoo! server is back up ("four" the fourth time, eh?)

@Wildman_Fujiami needed some help on authentication, and since I had decided to help in that regard, he has now officially made his Yahoo! server public and even made a little site for it where you can register an account rather than make one up. This does, however, mean that old accounts that were created with the “register on the client” scheme are now invalidated, now that proper authentication has been set up.

Read Wildman’s thread on this update if you’re interested: PSA: Notice on update to Yahoo! server. 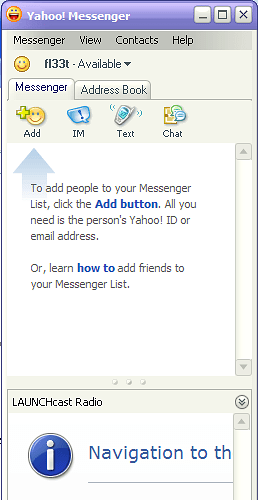 everyone can go back and start using Yahoo! again (for now, assuming Wildman doesn’t find out and shut it down again).

This time, since the server’s reboot, it doesn’t seem that old accounts are trashed, so you can still add me under fl33t, and as I’ve said time and time again, I won’t be using that buggy mess of a server often, however, so don’t expect me on there every day or so.

Also, here’s some patching instructions, if you’re not in the know:

Hello, as you may know, from the pools of the "how about a Old Yahoo! Messenger Server" theres this guy (Wildman_Fujiami) who made a basic yahoo messenger server, informed that he opened the server to outside connections, meaning that you can connect to the server and chat with people, since yahoo messenger isnt aim, where you set the server from the settings and your ready to go, you need to do patching via regedit (oh no) Anyways, to start off, heres the client download: http://www.oldvers…

I never even got that server to send messages properly, but I might try and sign in again.

I tried messaging myself, and it’s flawless atm.

And a day just after posting this, the server is down again. Wonders.

LOL It looks like the server came back up again according to @WindowsXPCat2008, eh?

meh , that thing is extremely unstable

Eh, it’s for anyone who’s even still interested in that thing.

i will wait the escargot server yahoo thing

So do we still connect to the server the same old way with the same version? I might try using it again.

Just know that with each reboot, I notice that old accounts are trashed, so you’d better create a new ID.

Will look into that later on.

Aaaaand it looks like @Wildman_Fujiami caught onto us and had shut down the Yahoo! server. Again.

Still not worried, though. I just wonder when the next reopening/shutdown period will occur.