It should be noted that most of the comments from me have been toned down.

I had a copy of Windows 8.0 (I could just upgrade it to 8.1 with the Windows Store) so i decided to put that into my USB and it appears that it was somehow corrupted… So i had to go to the official Microsoft site to get a Windows 8.1 ISO. Fast forward because my WIFI was slow because Vivaldi. I was able to install Windows 8.1…

So i decided to use a Windows 8.0 key from 2012, I worked. There was no “Windows 8.1 Pro” watermark. The watermark just reappeared when i was installing Steam just to test Portal 2. I jumped into Metro settings to find this… 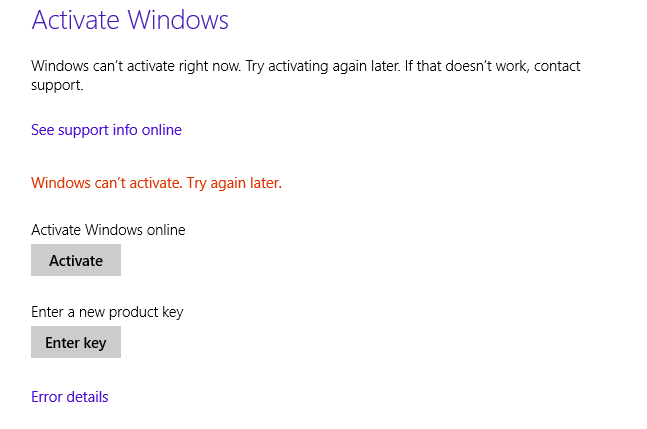 it says that “Windows can’t activate. Try again later.”, which is not helpful… I decided to press “Error details” and strangely doesn’t show any thing. 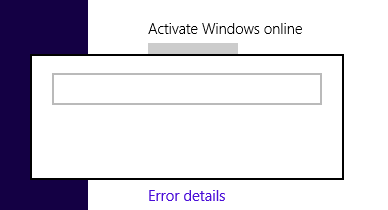 I took a look in the control panel there was this option.

It doesn’t work… I thought linking to my Microsoft Account would work but it seems to not work since according to the Microsoft Support Site. It’s only for Windows 10.

So it seems i’m on a dead-end. What should i do?

Update: I’ve tried Microsoft Forums and it seems when i typed this… I was too… welp, harsh. fuck… This is the reason why there’s drama in the later posts of this MessengerGeek discussion. Was i too tried? Maybe. 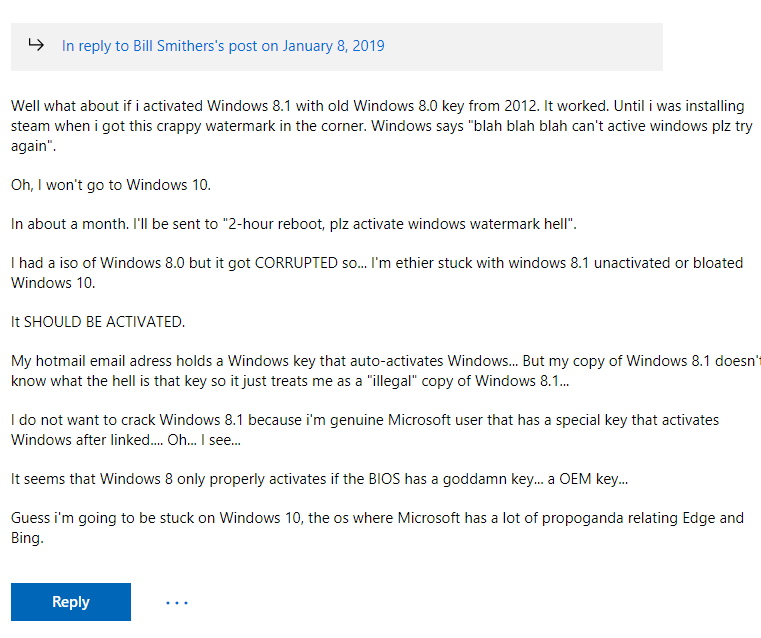 image.png761×638 21.5 KB
As you can see. I said that “Windows 8 only activates when the BIOS as a OEM key”. It’s because i was able to install Windows 8.1. the same operating system. Into a Dell laptop. And it activated after the wifi drivers were installed.

The problem is my computer is a hand-built computer from 2012-2013. Not some OEM computer unlike my Dell Laptop or my Acer tower, both of which are from 2014.

because sometimes i’m a fucking idiot)
Because i was rude to one of the community forum users. They’ve also replied kinda rudely 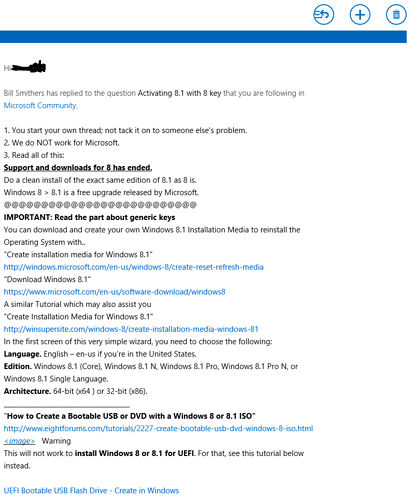 He/i wasn’t able to understand what i/he said. This made me confused since most the links were about making USBs.

When i logged on. There was no make thread option, possibly because i didn’t noticed the header…

If you have a retail Windows 8 product key and want to clean install Windows 8.1 or Windows 8.1 Update , then you would need to enter a generic key below to install unactivated with, and change the product key later on in step 22 below to activate with your Windows 8 key.

I have a goddamn retail 8 key. This part seems to be related to reinstalling Windows…

22. If you have an Enterprise edition or needed to use a generic key to install with from step 4 above, then you will now need to change the product key to enter your key and activate it.

I did all of that shit… It said “Windows can’t activate”.

" How to Activate Windows 8 and 8.1 by Phone"
http://www.eightforums.com/tutorials/24636-activate-windows-8-phone.html

I did not had a phone number.

Here was my salty reply.

I never asked to reinstall Windows 8.1, I asked how do i activate my already installed copy of 8.1…

Don’t they know i don’t have a fucking phone?

How are they supposed to know? You never specified that on your reply and their most likely guess is that you have one, considering most ppl have one these days.

When i logged on. There was no make thread option. 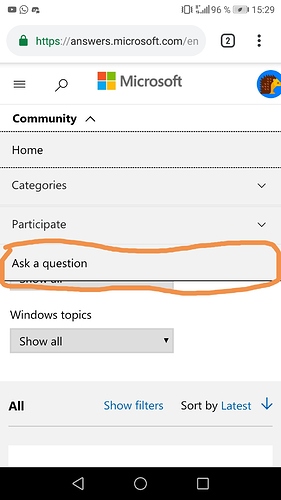 It appears that Microsoft Support is fucking rude with me.

That’s not Microsoft support, that’s a forum member trying to help you. So maybe you should stop being a little bitch and appreciate that they at least responded to your thread.

Check the recent updates. You probably installed the update that broke activation. Or maybe you haven’t installed updates at all.

It appears that Microsoft Support is fucking rude with me.

um, that’s the forums, not MS Support.
The guy who replied to the thread doesn’t work for Microsoft. Also, you shouldn’t hijack someone else’s thread.
And of course, starting fresh is a good way to rule out most problems that programs you install can create.

There’s also 2 links, For making me a USB. Useless! I can just make a USB with rufus! It’s more faster…

Not everyone knows how to create a USB. They don’t know if you know if you can make a USB in rufus.

When i logged on. There was no make thread option. Hey, at least he splitted my comment.

Yes, things can be phrased differently while keeping the same meaning.

He isn’t talking about downgrading to 8.0 either. He’s simply telling you to install the same edition of 8.1 as your 8 key is.

If you have a retail Windows 8 product key and want to clean install Windows 8.1 or Windows 8.1 Update , then you would need to enter a generic key below to install unactivated with, and change the product key later on in step 22 below to activate with your Windows 8 key.

I have a goddamn retail 8 key. This part seems to be related to reinstalling Windows…

…did you even read this?

" How to Activate Windows 8 and 8.1 by Phone"
http://www.eightforums.com/tutorials/24636-activate-windows-8-phone.html

What a fucking joke… Don’t they know i don’t have a fucking phone?

No, they don’t know you don’t have a phone, you didn’t tell them, and they assume you have a phone because most people have cellphones or landlines.

If you do wish to/need to keep a record of it:
“Windows 10 Embedded Product Key Tool”
https://neosmart.net/blog/2014/windows-10-embedded-product-key-tool/

Umm… it works on Windows 7. I just tried.

All in all, you should appreciate that this person even replied to your question.
Also, as Raymonf said, check your updates, maybe an update broke activation. I’m out.

installed the update that broke activation

I have no updates that breaks activation.

I have no updates that breaks activation

How are you so sure?

actually, it’s you being fucking rude to Microsoft Support. the person you were contacting isn’t even part of Microsoft’s team, he’s a community member who was assisting you with what you were tackling at. stop trying to be ignorant and actually listen to help when you need it.

he’s a community member who was assisting you

Well the only did he was doing was waste my time making me “reinstall windows”.
Meanwhile there’s a new message from the reply i showed earlier. 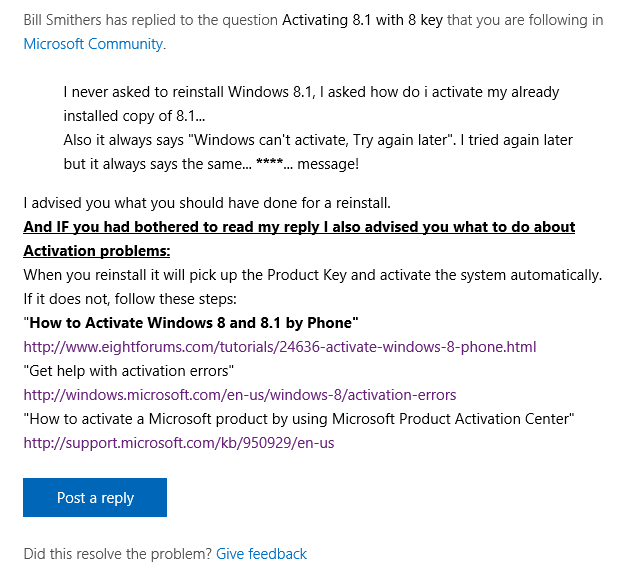 Notice how it’s about a phone number thing… I don’t own a phone number. Some people said that i had to install Skype but i don’t like Skype because how bloated performance-wise it is.

The 2nd and 3rd links didn’t do anything and the 3rd link is related to Windows 10. So i’ll be “paying” for making a already bought Windows 8 key from 2012 working again. The 3rd link mentions the 2nd link… Which is very unhelpful.

How are you so sure?

Because even though there are two updates installed. These two updates were included with the ISO. (Janaury 12 was when i installed the copy i’m currently having trouble).

It’s always stuck on “checking for updates”. So i’m going to install KB3138615 to update the Windows Update client.

SPOLIER ALERT: It did not worked. dammit.

If my copy of 8.0 wasn’t corrupted then it should have worked. So i possibly installed 8.1 when Microsoft’s Actviation servers were… well broken?

It’s always the bullshit “Activate by Phone” but i never plan to get a phone number because how useless it is.

what about calling 911 or emergency in the future? how is it gonna be?

I think you can call 911 without having a sim card. I don’t really know but i said “Phone Number”. not “Phone Device”.

So you have a phone, just not a number? How the hell does that work?

By not having a SIM card.

You should get one then (unless you can’t)

It’s always the bullshit “Activate by Phone” but i never plan to get a phone number because how useless it is.

How about you just use Skype to call the toll-free number?