What do you think of a Skype Revival thing? 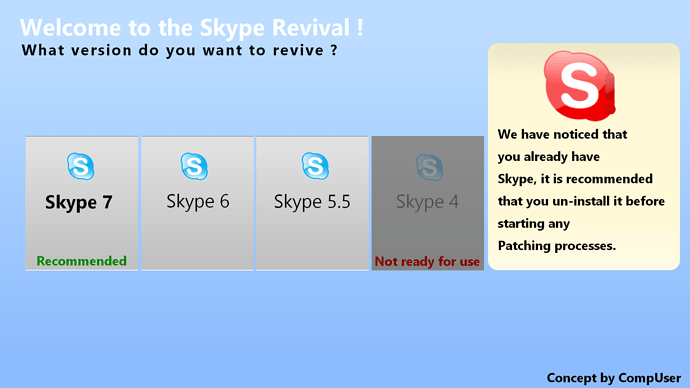 The original design of this one isn’t from me

(By that, i mean someone made this, and i re-made it my own way)

Skype 7 still works for a long time isnt it?
btw. whats the problem with the newest skype?

WE NEED THIS NOW!!

I bet I can code some of it with VB .NET if you’d let me work on it with you.

yknow i wanted to make a skype revival in the form of a new program entirely from VB.net on my own server but ill have to get into that later

This isn’t MSNMessengerGeek, this isn’t a forum where people only talk about MSN Messenger! 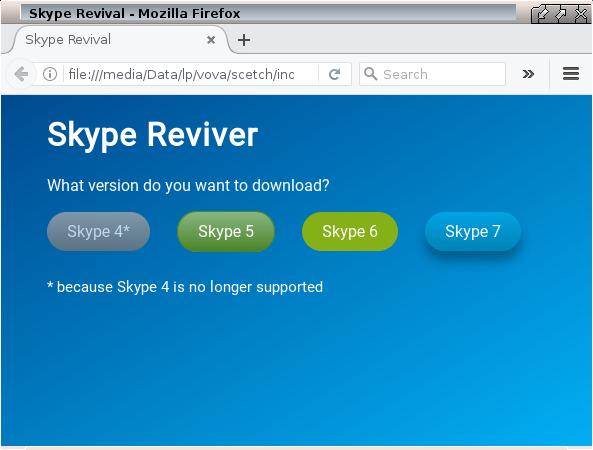 I actually had an idea for something like that. I was aiming for it to support as many MSNP24-compatible Skype clients as possible (around Skype 6 - 7; and also include support for P2P Skype clients if possible), and make it available a la Messenger Reviver.

However, there is the problem of Skype clients not handling “live:” accounts properly, and if you weren’t lucky enough to obtain a classic Skype username, then you’d be locked out. Basically, there’d be a gap for new users using this service, and I’d have to plan a solution for those people if they’d want in.

There’s also the old P2P Skype clients, which does include Skype 5 I think, since they use a completely different protocol from MSNP24. However, that can be mitigated with a server-side translator. But even with that there’s another problem.

Early Skype infrastructure made it so that clients would only rely on servers for contact management and authentication, and messaging was all P2P, which would brick users from talking to people on the actual Skype service, which is all on central servers now. From some further research, it seems that Skype clients 6 - 7 had backwards compatibility for the P2P messaging early clients used, but the same can’t be said exactly for Skype 8 yet. So a fallback plan for that, personally, would be that Skype 5 - 7 users could use the gateway, while users using clients below that would have to resort to a completely separate server to talk to each other. Disappointing, but if all else fails.

If I or anyone else would be up to the task, then this “Skype Reviver” thing should be a gateway, but if Skype 8 isn’t backwards-compatible with P2P messaging, it’d be best to ignore that if you really wanted, but if you wanted to support every user base, then go mad and possibly strip classic clients that primarily used P2P messaging from the gateway and make them use a separate server.