Fixing Messenger's tabs to use the latest version of IE

Some of the more recent tabs now added in Messenger do not appear correctly or throw javascript errors due to the IE WebBrowser Control which defaults to IE7 mode unless you tell it otherwise.

Thankfully, it’s easy to fix most of them by adding some values into the registry.

Note: I had no luck getting Spotify to appear after logging in, but feel free to try as I haven’t tested it extensively.

As mentioned above, the WebControl defaults to IE7. This is controlled by whitelisting the executable and indicating the version of the IE rendering you desire with a DWORD value. If you specify a version higher than the one installed, it will give you the best it can.

I have elected to use IE12 as it’s the current (and possibly last?) version. This will render as IE11 on Windows 7 when IE11 is installed.
(you can also use LOCAL_MACHINE for all users but you then need to specify under the Wow6432Node for bitness)

Additionally, I have whitelisted the Messenger executable to GPU rendering key:
HKEY_CURRENT_USER\Software\Microsoft\Internet Explorer\Main\FeatureControl\FEATURE_GPU_RENDERING

14 Likes
How do you add custom tabs?
WLM 8.x tabs are now a reality!
Ideas for MSN tabs?
MSN Messenger 7.5 configures Office 2007 endlessly
Script error after installing the patch what solution?
Is there a way to fix this $%/? script error?
WLM 8.1 Onboard Browser
Improving Escargot's messenger server source code
Error Script
3 reports on the Messenger problem
#sad ( raw and random post )
Failed to enter the wing pag https://wink.messengergeek.com/ via MSN
Tabs are working!
Broken scripts
'An error has occurred in the script on this page'
Some progress regarding games
Script Error when logging in
Popping error window everytime when I'm logging on Escargot 8.5
Web Sharing
What is this?
[Archive] After a year of being puzzled, we've finally got the WLM 2009 problem solved!
alzcore397 July 15, 2017, 7:31am #2

Great thanks!
Posted this reply through MSN 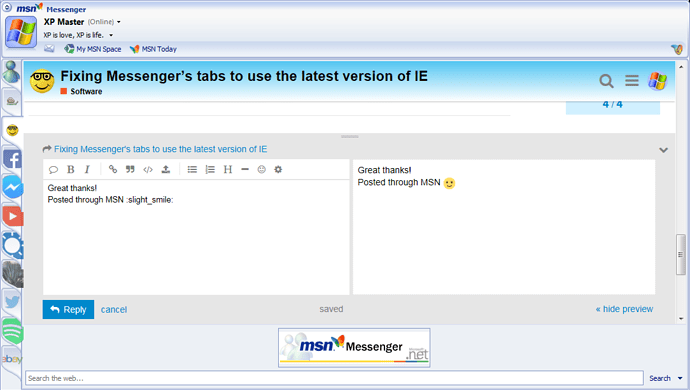 Its so cool thanks you Trekie 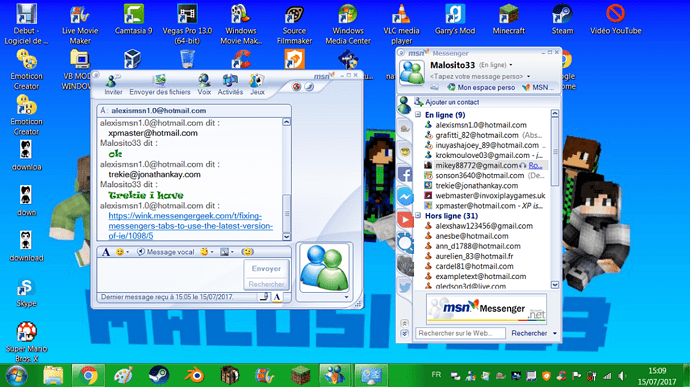 Is it possible also to use other browsers such as Firefox or Chrome ?

Is it possible also to use other browsers such as Firefox or Chrome ?

I’m afraid Firefox or Chrome do not have the required COM controls to allow this to happen, so this is IE only

The reason is i’m on xp and the tabs haven’t shown up yet after putting the registry in.

Can i change facebook mobile site to true site on msn escargot ?? Because a don’t realy like mobile version :S And also or facebook messenger ! Must have way to change it ??!! Please tell me if you have tric for this 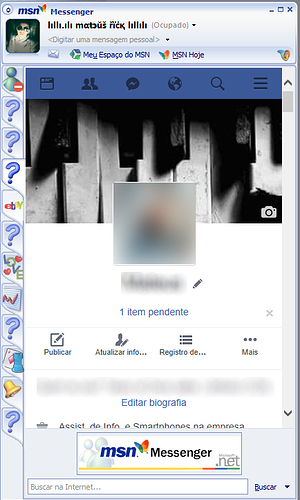 how you get this old tabs man, and not the new ones?

This screenshot is old, in it I could access the bing search and access any site by it. I just used it as a demonstration of what mobile facebook would look like by replacing “m” with “touch” on the server.

For custom tabs, you can only run a custom server with custom MsgrConfig and replace the url in the executable, which is nothing practical.

anyway thanks. by the way i havent see you online on MSN lately :P. jonathan fixed the tab issue take a look:

Fixing Messenger's tabs to use the latest version of IE Software

Some of the more recent tabs now added in Messenger do not appear correctly or throw javascript errors due to the IE WebBrowser Control which defaults to IE7 mode unless you tell it otherwise. Thankfully, it’s easy to fix most of them by adding some values into the registry. Quick fix Close Messenger fully - right-click Messenger’s icon in the notification area (by the taskbar clock) and choose Exit Download and run this .reg file Run the .reg file, confirm administrator rights for the regi…

I’ve been busy, very difficult to be online. I saw this fix.

For those who use Windows 10 or 8.x as I do not need to use it.
I was watching some videos on youtube that divulge Escargot.

The “[” is not to create a thumbnail in the topic.

propably these people except tasos didnt even know the existence of messenger reviver 2. back when official servers were online.

im impressed thought how many people made tutorials

Here in Brazil for example, almost nobody has heard of Messenger Reviver. The people they met ended up giving up using MSN due to having no contact to add and chat.

really? when official servers were still online ,most of my contacts were spanish speaking. but unfortunately because they had windows 10 and they didnt know that you had to revive again after a big update so they thought that msn stopped working.