Error for Messenger Plus,

So. I have Messenger Plus with escargot, when ever I go to the skins place. it always says 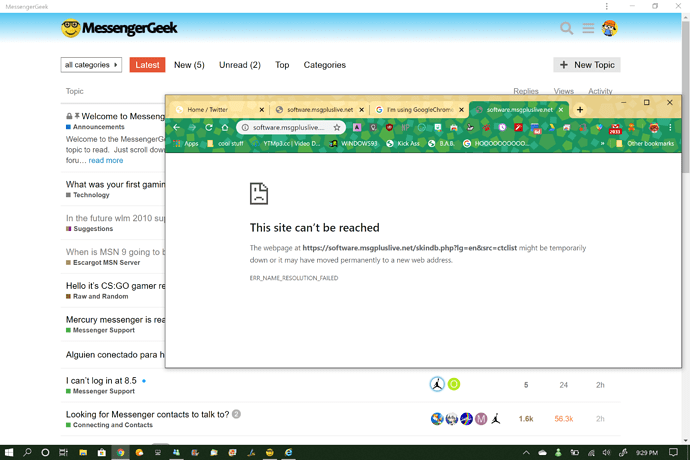 Yeah the Messenger Plus domains sadly aren’t up anymore (they were up for a good while after MSN Messenger was discontinued, I’d say around 2017 was when it finally went down). Luckily there’s a skin archive, among other Plus goodies, someone posted here:

Repost of skin/plugin/scripts archive Messenger Plus!

https://www.dropbox.com/s/h0ng0hkq057j6qp/msgplus-plugins-scripts-skins.zip thought this would still be interesting as it has skins from 8.5 up to 2011, so i will repost it since the original thread from november of 2017 didn’t really get much attention Note: Archive is 464mb Note2: Obviously, 2009 or 2011 skins wont work with 8.5. but the plugins/scripts should, as they are not really version specific.

There’s also a dedicated skinning category that sadly hasn’t gotten much attention these days, but it’s worth checking out.