What was so wrong with Windows ME?

I honestly never understood the hate for Windows ME, I used it in a VM and found no difference from different Windows 9x Series.

It crashed all the time. At the time, 2000 was better for basically anyone, no real-mode DOS, and it was built on the ancient 16/32-bit 9x kernel.

I actually won a bid for a Dell Inspiron 710M and was actually planning to downgrade it to ME (for no reason at all actually) and changed my mind really after seeing this post.

It crashed all the time

You sure about that? I’ve heard that mostly came through driver incompatibilities, and even if ME was actually buggy, would you think Microsoft would release that even after the several rounds of bug testing?

TL;DR: Windows ME is not a buggy mess by itself and rather from hardware/driver issues, and people still like to put it under the same treatment as Vista.

the funny thing is that I reinstalled it only once

You can install it if u want to.
BTW, here’s a screenshot (YEAH, I KNOW IT’S VMWARE) 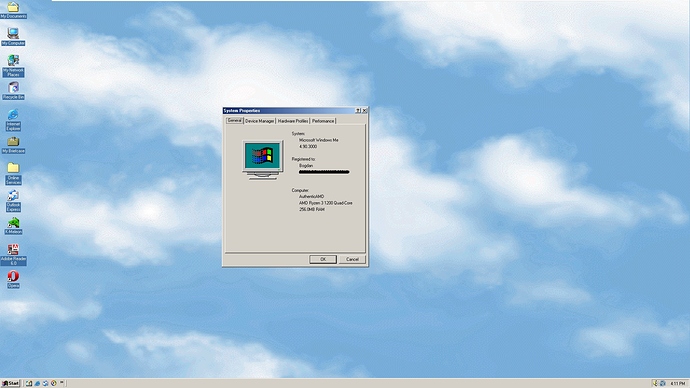 Here’s a little update: I accidently destroyed my old pc by trying to install Windows ME on a Windows XP system. I am totally smart guys.

Windows ME wasn’t that bad in terms of UI, but the kernel eh-h was faulty. However the computer games had much better playing experience, larger base of drivers to compare of Win98SE. Actually I did like that OS, but not for so long, just about for a year, then I switched to WinXP when it came out on the market.

I honestly never understood the hate for Windows ME

to be honest with you, 9x didn’t age well at all.

plus they were already working on an NT operating system for home computers before ME was even released. i have no idea why Microsoft shipped it at that point.

For my experience in VirtualBox, the startup sound has lots of bugs. I hate it due to that startup bug

Basically, Windows ME was an Operating System that was built quickly to leave expectations with the successor of Windows ME, Windows xp. Personally, I think Windows ME was very incompatible and buggy with the hardware and drivers due to lack of dedication and time.

honestly, it was the vista of its time, wasn’t well made for the hardware it was put on, and was very unstable

it was the vista of its time

you shall die /s

Millennium was rushed developing and it was not enough tested, hell yeah, the new millennium was around the corner and they’re already were starting to develop the new NT version for consumers

Like most said here
Badly timed, and NT was more stable
It had a lot of instabilities but kind of expected