What perplexes me about MSN Messenger

From looking at a YouTube search result of “msn messenger,” I’ve noticed that most of the videos brought up were from people of British/European origin, and honestly, it just drops a question in my head…

Why was it mainly a European thing when it wasn’t even made by a primarily European company?

Are Microsoft products highly favored in Europe? Was MSN Messenger just lucky? (Also, just to add, was the legacy Yahoo! Messenger given the same treatment as MSN in Europe and how did it get popular in India in the first place?)

If you have anything to say about this, reply down.

also, when MSN shut down, it was down everywhere, except in China… why china?

I’ll assume it was in high use by businesses and authorities alike.

I do not know if that’s true, but I was once told that it is because VOIP programs in China are banned (like Skype).

Well, AFAIK there’s nothing wrong with stuff like MSN Messenger being popular in foreign countries. For example, there are loads of latin american countries where Windows Live Messenger was popular (including Venezuela).

I have nothing against things originating somewhere becoming popular elsewhere. But my question is HOW and WHY it got popular in aforementioned foreign countries.

Who knows. Most people in Venezuela know about Pepsi-Man (mainly because of the PSX game) even when that game actually was Japan only.

Your observations are spot on, Messenger dominated Western Europe for instant messaging in the early 2000s, in particular Messenger’s largest market for a good period of time was the Netherlands and Belgium.

I think luck would be a huge part, just being in the right place at the right time, but they did make some good choices which would have helped.

For example, Windows Messenger was “in your face” in XP, being the first thing you see after logging in – “Set up a .NET Passport!”. Another was initiatives with the mobile providers, which was driving the mobile explosion going on. As well, the early versions of Windows Mobile (2003+) were huge in some parts of the Europe/UK, all with Messenger pre-installed. At the time, Windows Mobile was dedicated towards development for the UK first, and even had an Orange UK cellular tower installed in Redmond for testing purposes.

In addition, one important feature other clients didn’t have at the time, particularly at the beginning, was good support for unicode and RTL text, which made Messenger desired in non-English speaking countries as it could write/transmit their languages properly.

As time went on Messenger became popular elsewhere in the world too, in particular Brazil and also Thailand and Messenger at one point in the 2000s was the mainstream desktop instant messaging tool worldwide. I’m not sure about the Yahoo/India thing, obviously there would be exceptions.

I found a neat little chart on this page, it shows the worldwide users over time per service till 2014: 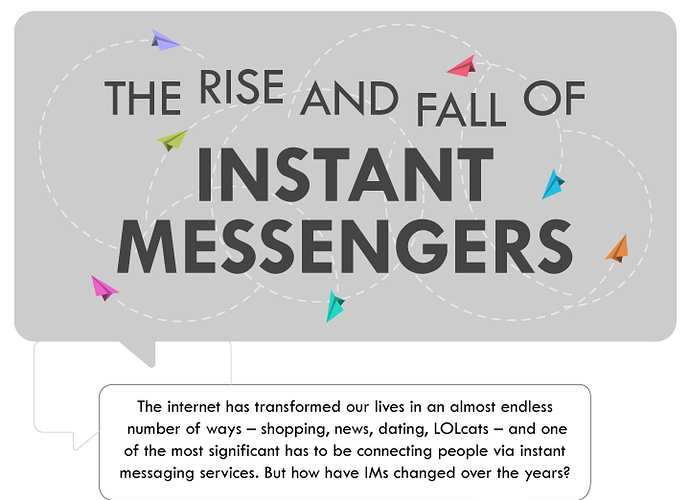 I don’t think the Europeans (or anyone else) cared that Microsoft was American-based. As a multinational corporation that works in most countries in the world, with software/support in their local language, I don’t think it would be a big factor in instant messaging choices.

except in China… why china

This was due to a preexisting contract I believe, as they had to partner with a local Chinese company in order for service to be there. I would imagine it would be far easier and cheaper just to let the contract run its course than to have to pay to break the agreement.

Thanks for the neat response.

Pretty interesting to see all of that popularity unfold from a variety of factors.

even worse, i see brazillian people on old reviver 2 videos trash talking that it doesnt work… comments from not so long ago, about mid 2017

the closest to what winks are is the gif integration in whatsapp and that moji thing on skype, but emojis???

If those videos/comments were from post May 2017 - after the official Messenger servers were shut down, then those people really should’ve been updated.

For info, 44% of MSN users were european… so yeah…

(SORRY FOR BUMPING THIS DONT KILL ME PLSSSSSSSSSS) Here at Lithuania MSN wasnt really popular at here until WLM 8.5 that was fully translated to lithuanian people used it a lot but most of used skype,cuz i only hear “OMG SKYPE IS THE BEST OTHER SUCC!!!11111”