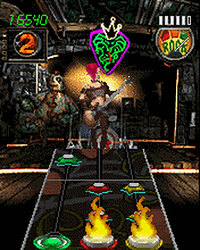 image.jpg620×775 308 KB
It’s been a while since I’ve done one of these, however since I have a flip-phone and discovered a source for J2ME games, I decided to get a few of them.
…
And by a few, I mean a couple dozen. This includes the entire Guitar Hero Mobile series, so I might actually release a review of some of them, similar to my GH5:M review and my GHWOR:M “review” (which I won’t link, it’s shit). The Guitar Hero Mobile series is actually rather peculiar; people have had extremely mixed opinions of it, with it winning the BREW 2008 Best Game award to another reviewer calling them “horrible”. They had 4 main-series games released for them, 2 expansions (yes, really), 2 spinoff games, and 1 DLC pack game. Today, we will be reviewing the first of the series, Guitar Hero III Mobile, and take a brief look at the DLC pack game, Guitar Hero III Mobile Song Pack 1.

The Setlist and Song Pack 1

The setlist is, in my opinion, one of the best in the mobile series, with songs I can recognize. Here they are in order. Songs italicized are ones I recognize. Songs bolded are ones I like. 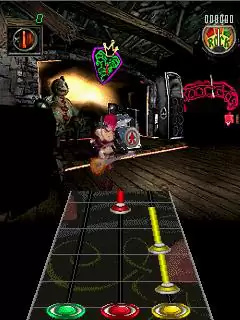 There was a metric asston of DLC for Guitar Hero III Mobile; too much for me to reasonably list. This is where I bring up Song Pack 1.
Song Pack 1 was essentially an expansion pack for devices like mine that can’t get DLC reliably blah blah blah setlist time bitches no formatting

They’re all MIDI covers. It’s a good setlist, though I could improve it. Let’s move on; this is a review of Guitar Hero III Mobile, after all.

Guitar Hero III Mobile is an extremely average game. The customization is awful, the setlist is okay, and the gameplay is basically what you’d expect. This is why I am giving Guitar Hero III Mobile a 5/10. As far as I know, you can no longer get this game, so you’d have to get a .jar and a flipphone to play the game. Even then, that’s illegal, because the game was paid.