[POLL] Which Arcade1UP cabinet should I get?

This is not all of the cabinets! This only consists of the ones I have been considering getting. Please mind I only have room for one, so I’m trusting you guys with an intelligent decision.

Prices are rounded up. Tax and shipping not included.

i have a fair amount saved so I’m not flexing on y’all, I’m not rich unlike someone I used to know

you know i kinda wonder how hemoo is doing recently

note: edited rampage option after glance at Walmart webpage, if you are one of the two people who voted you’re gonna need to revote 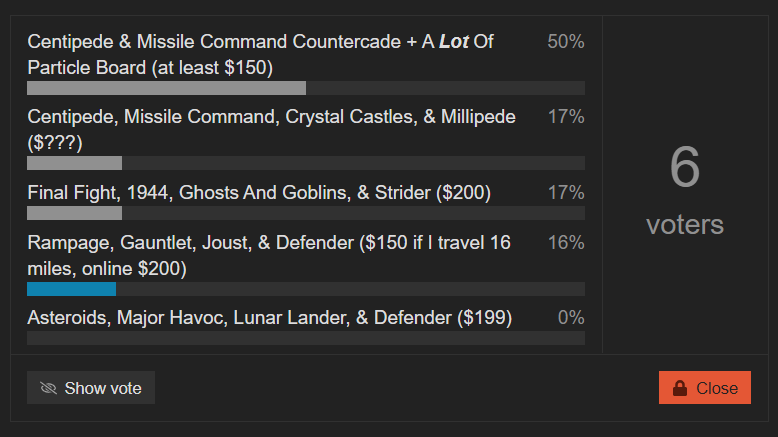 As you can see above, I have bought the Rampage Arcade1UP machine. However, I’m receiving…a fair bit of money, let’s put it at that, a few months from now. As I only have room for 1 or 2 more, which should I get/save up for?

When it comes to the tabletop and wall-mounted releases, I have room for more of those than 1 or 2, so please keep that in mind before you vote. I’ve also added one of the Replicade releases that weren’t made by the Arcade1UP guys.

If the “Not Confirmed” ones don’t come out, that’ll be my problem.

im waiting for berzerk to enter the polls

tell em to make berzerk then

The unexpected return of hemoo!