Pidgin had its State of the Bird Address 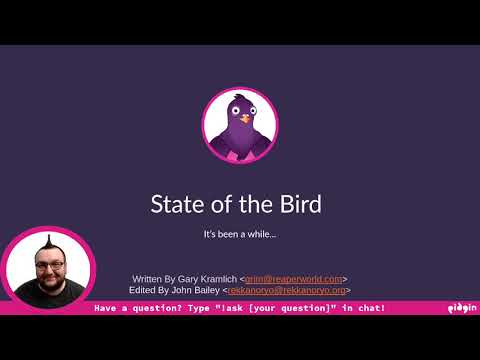 I attended Pidgin’s State of the bird. I can say that with the new release of Pidgin 2.14.2, Phoenix AIM still (sort of) works. There won’t be a Pidgin 2.15.x. The next release will be 3.0 at the end of the year. It is supposed to vastly improve things like handling inline images, and importing Emoji packs from different services. In addition to better integration with Voice and Video Services.

That said, I brought up Phoenix AIM, and Escargot MSN. He said that any support for that would have to be maintained externally by members of those respective communities contributing third party Purple modules.

He said that the AIM, MSN, and Yahoo protocols have been dead for four or more years, and there is no reason to continue to support them in Pidgin. (AIM is the very last module still supported internally, and it is barely functional with Phoenix AIM.)

He said that any support for these legacy services, needs to be coded by people from that community. The Pidgin developers themselves are too few in number to create modules for services with such a small user base when larges services like Discord, Skype, and Facebook need attention.

I want also to add that many, many technical problems that users of these legacy retro services would be solved if an external modules for Phoenix AIM, and Escargot MSN were produced. Pidgin would become the most compatible IM client for these retro Services.