While looking at 2001 archives of Patchou’s personal site to simply see if the Plus! site was located there at the time, I was instead greeted with a page flooded with French and early 2000s site designs (also a notice claiming that the site was best viewed with Java installed or something), and from what I could understand, this was the site of the Patchou that developed Plus!. While trying to make my way through the site, I did come across a few English pages, and ultimately found this page describing one of his programs he developed before he even conceived Plus!, named IRC Log Viewer. And from the looks of it, it even got ZDNet’s attention, which is a good start for him.

I did some searching around on Google for any more mentions of the program by major outlets, and although I didn’t find any of note, also considering that the program was most likely thrown by the wayside as the years progressed, I did find @Patchou’s write-up on his own program.

So basically, he used to be into IRC a lot back during his teenage years before he moved to Canada in Quebéc. For those who don’t know, IRC is basically the precursor to instant messaging as a whole, and it’s still thriving to this day.

Coupled with the fact that he was learning C/C++ at the time with Visual C++ in hand (6.0, I assume), he had an idea for his first actual program: to locate the mIRC and Pirch logs it could find in any specified directory and fancify them with RTF formatting and colouring, birthing IRC Log Viewer in 1998.

As this was his first program he had seriously developed, it was clunky, both in terms of UI and the source code, so he’s not impressed with it now, but he’s still proud that he started out with it, especially since he used it to practice the English he was learning at school at the time.

At this point, I wanted to test this thing out myself, and luckily, it wasn’t Wayback Machine hunting season, as the guy actually left out a ZIP with the program’s files inside (the installer he originally packaged the program files with was incompatible on 64-bit architectures I assume), so I gave it a test drive, and I’ll just say that it was good for its time.

First of all, when I launched the executable, I was greeted with a message box thanking me for installing the software, albeit with some small spelling errors. I mean, Patchou did warn readers that his English wasn’t that good at the time. 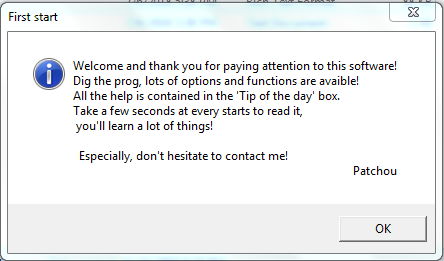 After dismissing the message box, I was greeted with a dialog with some more spelling errors that basically showing some configuration stuff to let the user locate their chat logs and fiddle with the display settings. However, I did notice that this time, the program didn’t attach itself to the taskbar, nor did it even show up in the ALT + Tab menu. Weird 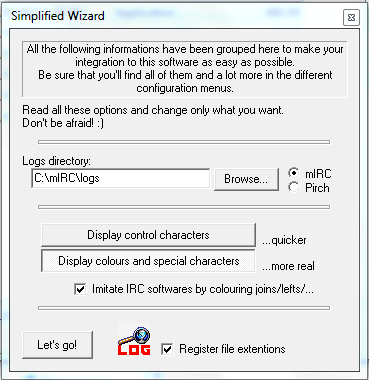 Out of curiosity, I decided to see if Patchou’s old program would parse my HexChat logs. I think the answer should be obvious as I detail more of this program.

After clicking on “Let’s go!”, I was greeted with a message box stating that “An unknown error had occurred”, but it let me progress with the initialization of the program.

I was then greeted with a splash screen that was as 90s-looking as it could get.

Afterwards, the main window popped up, with guess what, more spelling errors, but the taskbar and ALT + Tab thing was fixed.

It didn’t load the logs in the HexChat folder automatically, so I had to manually add them to the program to parse, and after it had tried to parse the log, unsurprisingly, it didn’t do as it was intended with the HexChat logs, and so the result was just the whole log in green. I can pretty much conclude that this thing could only parse mIRC and Pirch logs. If only I had mIRC or Pirch to properly test this thing with… 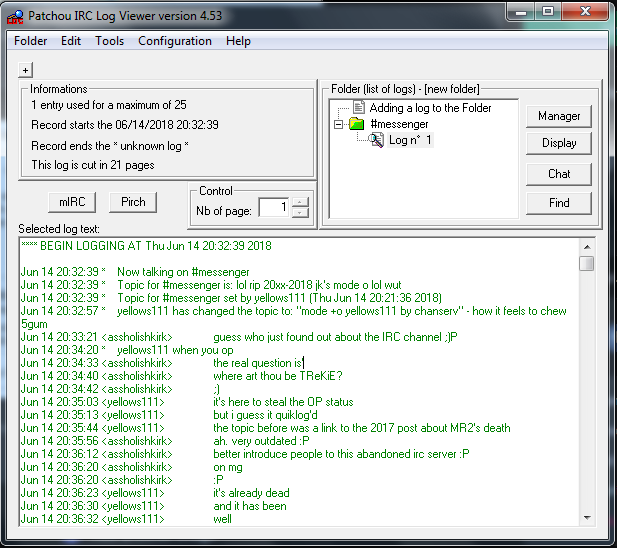 As for the other stuff, not much to fiddle around with, but the About dialog was interesting, to say the least, spelling errors aside. Complete with a picture of Patchou circa late 90s - early 2000s. 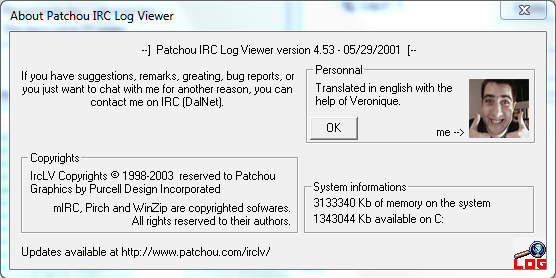 As for internals, it seems that Patchou bundled the MFC and RichTextBox libraries with the program files, assuming that both aren’t already on the system, along with a Readme and version log, both in French. The thing also comes with a version of the binary that supports Unicode, which would be considered poor practice nowadays, but that was back when people both used Windows 9x and XP, in which the latter supported Unicode, but the former did not, so I’ll give that a pass.

All in all, this isn’t a bad program per se. Somewhat clunky and buggy, yes, but from seeing screenshots of IRC Log Viewer being used with the correct kind of logs, it doesn’t do a bad job in that, although I can only imagine the code that does the parsing would be clunky itself.

Just know that this was made by the guy who also developed an MSN add-on we all know and love, even after Microsoft finally shut down the Messenger servers for good. This program basically marked his programming career and his career in making people happy (hehe).

“Thanks for paying attention to this site, this website has multiple goals that are in several web pages you’ll find a buisness section and a IRC log viewer section, my personnal sites aren’t available online”…

I may have mis-translated something