Google Hangouts shutting down November 1st... or not

It’s November 3rd here, and https://hangouts.google.com says at the top:

Time to upgrade to Google Chat

Starting November 1, 2022, Hangouts on the web will redirect to Chat on Web. We recommend moving to Chat now.

Except it’s two days later, the site is still not redirecting, and it still sends and receives messages just fine.

Not that I’m complaining. I guess we’ll see in a month from now if that’s still the case.

EDIT: Seems to have shut down on Friday, November 18th.

google’s just lazy. they ain’t shuttin down stuff for a long time or a few weeks

It is still working for me here. No redirect yet.

By the way, for those of you who have it shut down already, can you test if this version of the Hangouts Chrome Extension still works? I tested it, and it works perfectly fine for me with no update message. The newest version however, does give an update message which is why I am linking to this version.

No redirect here either. It’s hard to believe they would make it account-specific, but who knows.

Maybe of some interest, I also still use the 2018 version of the Hangouts Chrome App (not Extension), however it stopped working on my main PC (“Connection error”) but it’s still working fine on my laptop. I did some experiments to try and figure out why it works on one machine but not the other, but no real success. Even transplanting the profile didn’t help.

Also with the last version of the extension, you can easily bypass the Google Chat message by right-clicking in the window, choosing Inspect, and adding display:none to the div with the classname ‘b0RRtb-Dibptc-Lb’. However, as it only works until you close the window, it’s not really a good solution.

That’s a handy tip. I cannot believe that Google would make it that easy to remove the update message. If they really wanted people to stop using Hangouts, they could have just blocked it completely instead of hiding it behind a message.

The Android app is similar behaviour to that too. At least last time I checked, in the final released version, when you try to open any window, it will load as expected, but then shortly redirect to the “This version of Hangouts is not supported” message, meanwhile the app still appears to work in the background (notifications keep working, for example).

In the older versions (I’m using version 18), the redirection happens if you open the app/go to the main activity, but if you open up a chat window via a notification or share to the app, it opens and is usable as normal. Also you can still open/start a chat window by holding a finger down on the Hangouts icon in the launcher, choose “Chat” from the shortcuts menu that pops up, and then select/add the contact of your choice.

This is how it’s been for for at least a year for me.

Well, looks like that’s it. Google Hangouts now redirects to Google Chat for me now. I wonder if the Hangouts App still works. Can you test that?

Extension (using modifying css trick above) and the App (on laptop) are both still working though. 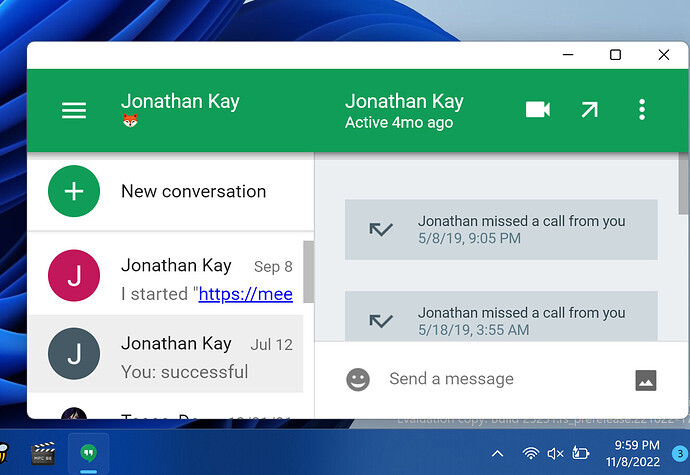 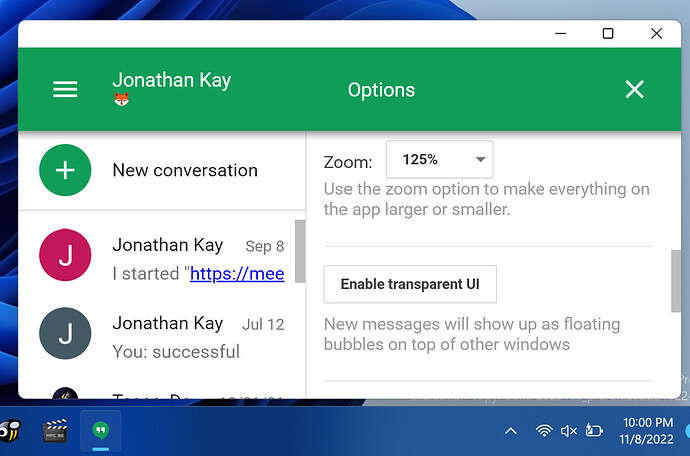 Yeah, I wonder how long it’ll last. I still haven’t figured out the difference between the Hangouts Chrome extension and the App. Aren’t they the same thing? Or am I missing something here?

The big feature is the bubbles/heads (which is referred to as “transparent UI” in the screenshot above). I found an old quick demo of it: 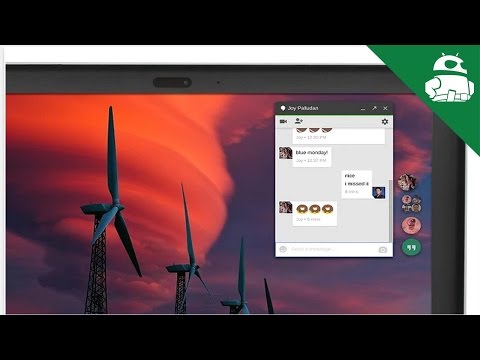 I never turned it on my laptop because of limited screen space, but it was great on my PC’s multimon setup.

The video mentions a launcher for these apps, which was removed a long time ago. Instead you launched it as an application in the Start menu (or autostarted with Windows) as it worked independently from the browser as an application (albeit still chrome.exe of course). That part is normal from PWAs today, but at the time it was a big deal. According to the message I posted about before, support for the Chrome apps in Chrome itself is going away in December though.

Got it. Just to confirm, the most recent version of the Hangouts chrome app has no update message?

No I’m afraid not. The most recent version of the app (2021.818.419.1), from what I recall (as it’s been removed from the Web Store) neutered the application with the update message and wasn’t usable. What you’re seeing in the screenshots above are the 2018 files I pulled from my own backups and replaced over the 2021 files.

I noticed on the weekend that Hangouts notifications were no longer coming through on Android. Looking back through the Android app, it looks like the app stopped working in the morning on Friday November 18th. Trying to send a new message from the app results in the ‘Sending failed… tap to retry’ message.

The earlier CSS trick with the extension also no longer works, and there’s no other code on the page but the “It’s time for Google Chat” message.

Looks like I found the culprit. This link here used to return a 200 response which allowed the loading process to continue. Now, it returns a 403 error and a message saying that the people api is disabled.