If you’ve checked the stats as of today, you’ll notice that the dreaded WLM 15.x.x.x stat has come back, and with 20 users active as I’m typing this up.

Well, it’s a troll this time, and probably for the last few times MSN 15.x.x.x stats were published. However, the suspect is known. They’re @Nojus2001.

Ever since he found out that Mercury Messenger can connect to Escargot with MSNP21, he decided it would be a good time to create a bunch of dummy accounts, login onto them in Mercury with the MSNP21 setting, and make them go through the auto-boot and reconnect process just to make it appear as if people were actually using WLM 2011. He then told me this via Discord, and I was dumbfounded to see that he was behind this:

And here’s a high-res version of the picture he sent me to prove that he was behind this (the supposed dummy accounts used to create the fake stats are highlighted in the red box): 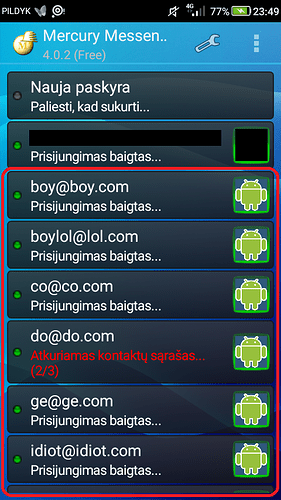 If you can see a little bit of a rectangle at the end of the account list, he seems to have more of these dummy accounts, so who knows if he has enough to create loads of fake stats with a lot of supposed “active users”.

Since the last time an WLM-related stat slithered its way onto Escargot, people were puzzled over who the culprit could be. Well, I think we have our answer.