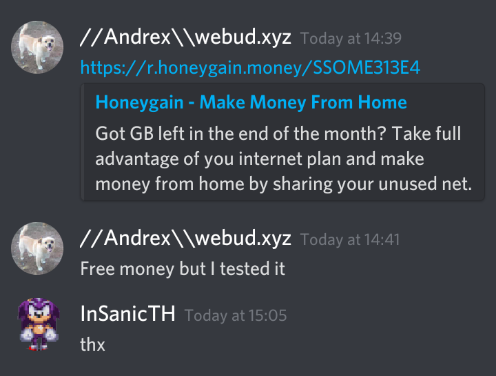 And he says he tested it

i don’t even fucking…

that’s all i have to say on this thread.

I flagged it as advertising, so maybe that helps?

go ahead and ask @andri_axysto if its legit or not, he told me about it not me

“Make Money From Home” sounds like a scam bro.

point taken, but it’s still not really good idea to post this on the forums cause it would probably fall under advertising?

Still generally not a great idea.

So, how much will you be paying me @InSanic? You’re using the platform I pay for to make money for yourself, so I’ll need a cut too, say, 90%?

But I don’t want your money, so let’s just not have referral links, I think that’s an easier fix.

Honeygain claims they are a crowdsourced network company which enables other businesses to conduct web intelligence, market research and content delivery, and also, facilitates proxy services to third parties, such as data scientists, Fortune 500, and other trustworthy companies.

So it’s a proxy “botnet” system, using your own bandwidth to upload or download files. The “payout”: 1 credit for 10MB of traffic, 10GB you’ll earn 1USD, 6 credits for every hour Content Delivery is Active and running.

This math is interesting because I have several cheap VPSs (OpenVZ) used for simple file delivery and they cost $20 per year each, so roughly $1.66 a month. Included with each of them is 3TB of bandwidth, per month. So my 3000 GB at $1.66 is apparently worth $300 to Honeygain. That doesn’t make a lot of sense.

And another question is, who would pay premium bandwidth costs for people’s (usually not-so-good) residential services? On betalist, they have a different reason, Honeygain clients use our infrastructure to run brand protection campaigns, perform SEO monitoring, as well as to conduct ad verification services.. Is it ad “verification” or instead maybe a mass undetectable ad clicking scheme?

There’s also claims that it mines bitcoin, but we’ll leave that for a moment.

Lastly, they’re supposedly paying me (and you) to sign up, but they won’t pay until it hits $20 of credit. That means the more people who sign up, the less will be earned by each person, and therefore a lot of people they’ll never have to pay out as they’ll likely never hit $20. In other words, the more you sign up, the less likely they’ll have to pay you anything. They incentize you to give them services for free.

There’s lots of sites and apps that can earn you small amounts of money over time, that’s totally legitimate. But it’s going to be over a long period of time, assuming they survive long enough to pay out, and you have to “real work” by installing (usually awful) ad-ridden mobile apps.

Instead, if you’re really want quick easy money, I would recommend you go over to your neighbours, and ask them if they’d have any work around their house that needs doing, cleaning, etc. or even at a local business. They’ll likely be generous and if you do a good job, will probably ask you around again. Then you’ll have cash on hand, immediately, with no affiliate links, schemes and you won’t have to pay me a single cent.

Instead, if you’re really want quick easy money, I would recommend you go over to your neighbours, and ask them if they’d have any work around their house that needs doing, cleaning, etc. or even at a local business

cant do that cuz of da covid19