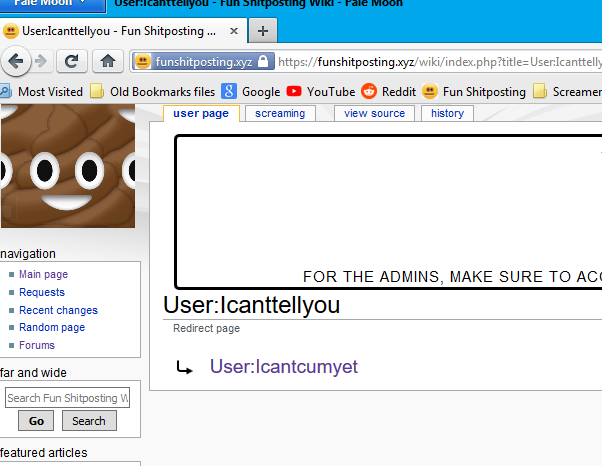 title say it all.

It’s a shitposting wiki, what would you have expected?

their discord says there isn’t rules to toxicity or anything like that, no i am not affiliated with the community, i just wanted to check their discord.

stay away from this shit, one of the guys blackmailed the owner to allow this to happen and if he did not allow it to happen he would get doxxed.

because some are linked to cvm

welcome to the internet

Well they claim I was annoying.

What does this weird shitposting community have to do with messengergeek and what the fuck is cvm?

cvm is literally a VM hosting service from what I can tell, i used a couple and its kinda cool.

And there is drama relating to it somehow?

anyone can access it, literally. just go to it’s webpage and use it

i’ve been in several corners of CVM’s community since 2018. afaik they won’t scream at you unless you do something stupid on their own grounds.

@icanttellyou leaked a private(?) VM program to their discord server’s #public channel, and was also generally annoying as shit about people on the VMs so he was eventually banned for it. he also got baited into sending his face to a CVM member and it leaked afterwards.

i can’t say much for him because personally he was begging me for access to my dedi in DMs.

you do something stupid

I did a lot of stupid things, I don’t want to remember my stupid crap as that makes me cringe. They even mock me out of the stupid shit I did.