This was the thread for MessengerGeekia, a project that existed from October 2019 to April 2020, or about 6 months. This thread was closed in February 2020, and the whole project was shutdown by me in April 2020. Barely anyone remembers MessengerGeekia. I still do, but i now regret making the project, dealing with edit wars of some guy (who may have been mine_master or pretended to be him?) and revert-wars with icanttellyou.

This was a hellhole of a thread. You can tell I and icanttellyou had hopes for moving MessengerGeekia to Trexion, however, due to time zones and TReKiE taking too much time to reply, the project ended up being moved to Miraheze, after being originally launched on Shoutwiki, which in my eyes, only had 1 part-time staff, and the others just left a long time ago.

About 2003tech… Well, the Discord has been semi-converted into a “Chaziz Video Entertainment” Discord, even though there is no mentions of the discord anywhere on CVE. 2003tech’s only project as of April 8th is 2003page, which almost got shut down but i kept it alive for some reason…

I’m currently having some headaches of copying some Wikipedia templates to MessengerGeekia.

Since apparently Special:Import can only be used by Shoutwiki staff, I have to copy and paste every thing, even the modules.

Also you’re welcome creating pages, shitty or not, as this wiki is pretty new

Oh and if anyone was interested on how the FANDOM version of MessengerGeekia (now discontinued), Here it is, https://messengergeek.fandom.com/wiki/MessengerGeek_Wiki, just don’t bother creating shit there. i’ll try to request FANDOM to close it.

Oh and, the logo is a “placeholder” until i find someone gifting me a logo for MessengerGeekia, i am not going to stay with the actual MessengerGeek logo.

Another update, I reused Wikipedia’s Common.css (for making the mbox look like a mbox) and TCRF’s Vector.css (as a placeholder before i start making the bases of the wiki’s apparance.) for making everything work.

I made new early-placeholder icons

30 minutes later, and now the theme is starting to look like the MG forum!

how do i default another theme pls help

The old wikia theme will not be supported. It’s going to be Vector and Monobook.

signed up for an acc…who the fuck took Ratking, clearly I am the cooler_ratking

I have managed to kind of theme the default ShoutWiki theme. 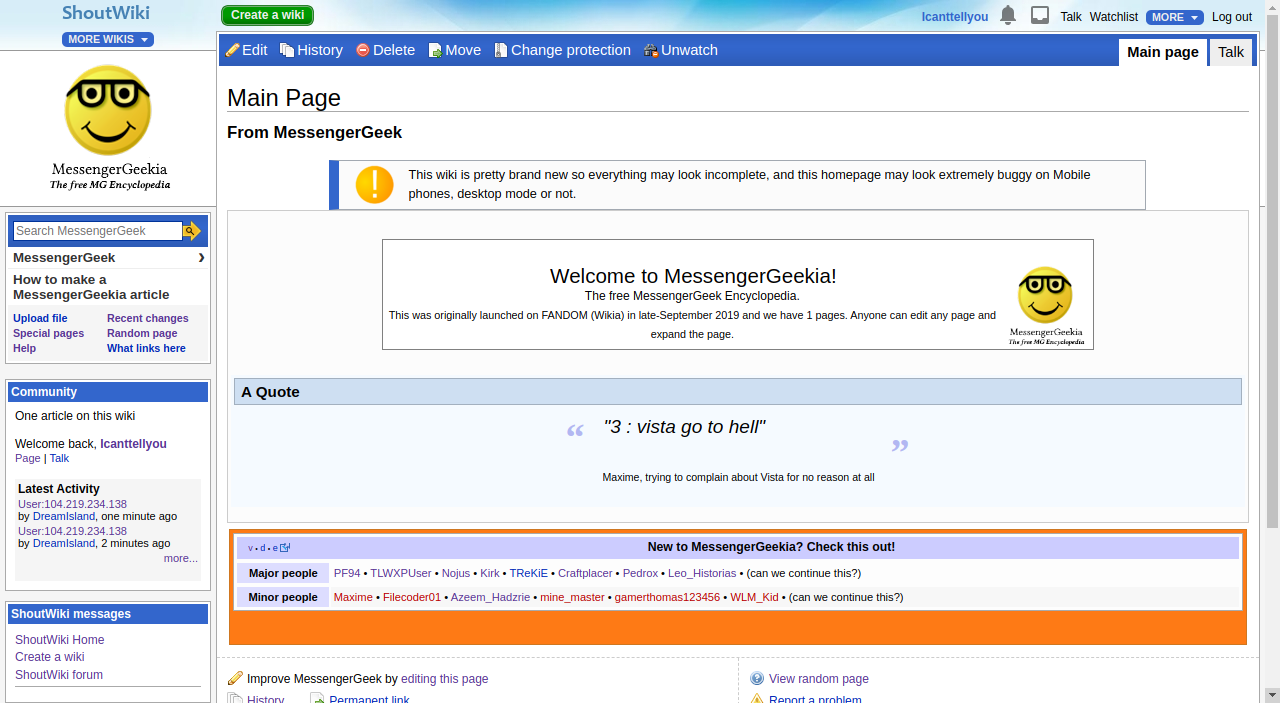 Can you remove the captchas? I could only make my account because I luckily got a good captcha.

my vision is fine, the captchas are sooooooooo blurry

i could read them fine

the register ones?
cus they looked blurry to me, and nothing else looks blurry
like, i couldn’t tell characters apart

then get your vision checked, christ

stop trying to pass the blame, the captchas are luckbased and the images are blurred to a degree that makes them illegible.

We also can’t remove the captchas since when you create an account on Geekia it also creates it on ShoutWiki.

Can you remove the captchas?

We can’t, This is all managed by Shoutwiki. If you can’t sign up due to the captcha (which i never saw), Then just edit with a VPN. It’s that simple.

Yeah no, dont use a vpn, it was used on mine_master’s vandals.