I am trying to do my first forum. (msgrDo)

Hi everyone, some days ago i wanted to make a forum, so i started by searching a name, and i found msgrDo, which sounds a little weird, but it’s not that important

Today i really started, installed SMF, customised it, did some boards, and my first forum is finished, well not finished yet as i still have to add some boards and some other things… but here’s a preview 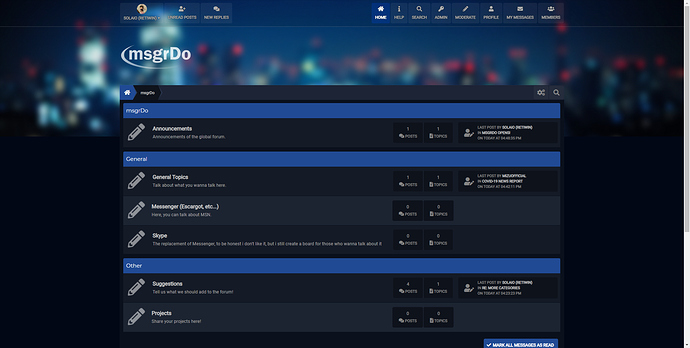 Some people already have access to it, as it’s almost finished, but i will really make it public in some hours…

So yeah, i just wanted to share my first experience of doing a forum

it is finally available! link : https://msgrdo.ga/

why is almost every single piece of fourm server software written in php?

like it or not it’s still what most websites uses, so yeah… maybe in the future all the websites will change but for the moment PHP is still a big part of the web.

i dont know anything about php

I’m sure I can make logins in something like Ruby, ASP.Net Core or any other server side scripting language.

PHP is cheap, relatively easy to use, and mostly reliable. Before PHP, we were using Perl (I made some decent money in high school writing perl), which really wasn’t the best language for the web.

There were technically far better options than PHP initially too, but Windows is expensive (for ASP), and server requirements were higher for other languages (JSP, ColdFusion,etc.) Web software made in these other languages generally cost money too, which limited their popularity. Thankfully, most of this doesn’t matter now, but that’s the history lesson.

Although I’m not disagreeing with any of your assessments above, in my world, PHP really isn’t used that much anymore (WordPress exempted), a lot more Python, Node, Ruby, ASP.NET, et al.

This topic was automatically closed after 60 days. New replies are no longer allowed.